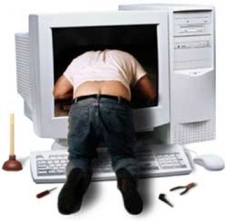 I mean, the man’s name is Weiner.

Journalists echoed the inevitable  playground trash talk and had a merited field day this week with the double-entendre gold mine Weiner handed to them. Having enough common sense to realize that posting pictures of yourself in your finest privates becomes public when you, you know, post it on a SOCIAL networking site—- was all on Weiner.

Though Rep. Anthony Weiner, as a member of Congress and therefore a public figure, should know that everything he does is fair game for public scrutiny (especially when orchestrated on a forum accessible by virtually anyone), his actions herald back to Sartre’s idea of why we, as human beings, write.

In his essay, “Why Write,” Sartre asserts that the writer writes with the intention of a reader, that the act of writing necessitates a reader to create the work, that “it is the conjoint effort of author and reader…There is no art except for and by others.” I am by no means classifying Weiner’s tweets as “art,” but there is no way that he didn’t post those pictures without knowing, at some level, that he’d have a sizeable audience. For whatever reason, he wanted his tweets found, whether he realized it or not (but how could he not?).

This generation of bloggers and Facebook rats can’t help posting things they shouldn’t. Facebook statuses “covertly” reference friends—which, more often than not, result in ex-friends. Blog posts depict heartbreak and other terribly personal (and in some cases, mundane, vain, etc.) details of the writer’s life. Why? “Oh, I write it for me.” False. For whatever reason, perhaps it is the alienating effects of technology (the anti-social enabler) that we feel like we need to project every ounce of ourselves on the inter-web. In some ways, we’ve allowed our online selves to precede our offline personalities to the point that we don’t exist to the world without the former. If we don’t portray ourselves as we truly are online, then others won’t perceive us as we are, and therefore, we are not. We are created by others sitting behind a screen, who are simultaneously creating themselves to be recreated by others.

For reasons unfathomable Weiner wanted to be caught. Whether Weiner really is as irresponsible and inappropriate and, well, ignorant as his actions suggest, his tweets have created him as an idiot to millions.  He will never be more than a Weiner in his underwear.