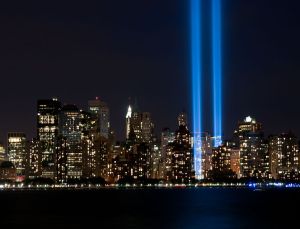 Sometimes I think that I have no right to even discuss it.

Ten years ago wasn’t a personal tragedy for me, at least in its most literal definition. I didn’t lose anybody. I was eleven years old and didn’t know that the World Trade Center was the same as what I knew to be the twin towers. I’d never even been to the city. I didn’t understand the implications of the attacks beyond the fact that it was something terrible that had happened here rather than its typical there. My eleven-year-old mind had created a world where such proximity to danger was an impossibility.

It wasn’t until after school, after seeing many classmates leave throughout the day, after being herded into an auditorium full of conspiratorial chatter –– everyone had a theory –– that I was reminded that I should have worried all day. My uncle worked in the city, more specifically, he worked in the World Trade Center, that is, until he was moved to one of the surrounding buildings a few months prior to the attacks. Still. My mother and the rest of the family didn’t know this. Without any word from him,  everyone was panicking. He walked, ran to the George Washington bridge, thinking that eventually it would come to crowds of people leaping into the water to escape whatever came next. Instead, ultimately, my aunt, who was pregnant with their first child, drove to pick him up. They now have three children.

After, I was sort of haunted by the whole event in my own way. I’d had a bad dream the night before Sept. 11, one of those dreams where you wake up knowing that something astronomically terrible happened, but you can’t remember specifics. I do remember, however, tall buildings, black crows and my family. Sort of ridiculous but still. I was particularly prone to guilt when I was little (I was raised Catholic), and so for weeks, I was convinced that I could’ve somehow prevented the attacks if I had managed to piece together the vague remnants of what I deemed must have been a premonitory dream. It was a belief fueled by a naive conceit that I, a sixth grader from rural New Jersey, could have somehow convince the world of the merits of my “vision.” In mere hours, no less. I lost sleep over this, believe it or not.

Immaturity aside, I think my guilt sprung from not knowing how a person in my position should respond to an event of Sept. 11’s caliber.  I’m still not entirely sure. How do we determine what claim we have to the tragedy? Any tragedy? Not that I’m vying for a piece of something so terrible, but  I feel like there is a line drawn between what I’m entitled to feel and what I am not. Yes, I am an American, and yes, my heart goes out to the thousands who lost someone. I can’t imagine their pain. Yes, in the years following the attacks, I grew to understand that more than people and buildings were attacked that day, and that the impact of Sept. 11, though centralized in three locations, sent tremors throughout the country. I felt/feel less safe. It changed my view of humanity in probably more ways than I know. I still can’t go to the city without somehow having the memory of it creep into my mind. Yet, I know that I was far less affected and am luckier than many. I am grateful and somehow, still, guilty.

Immediately after, public patriotism was the safe avenue anyone could take, no matter their stake in the mess. It was a way to show support for those who suffered, as well as claim your own voice in reacting to the attacks. Ten years later, I’m not sure what the safe reaction is. I’ve been studying media coverage of the tenth anniversary with interest, comparing how each network, newspaper, website, etc. handles it. In some cases, it’s hard to miss the sense that the time dedicated to the anniversary is out of obligation. In other coverage, though, such as the The Star-Ledger’s , the local approach makes it seem more personal, like it’s something the newspaper wanted to do, rather than felt like it had to. My favorite, thus far, is  The New Yorker’s “After 9/11” e-book, which contains the publication’s post 9/11 coverage.  Ten years later, I feel like I am recreating my reaction by reading those of others.

Ten years, and I’m still unsure of my appropriate place in thinking of the attacks. What’s too much and what’s too little? What’s respectful? How personal can I regard the attacks without feeling that I am somehow invasive?  Somehow I still feel like I think about it too much, but at the same time, not enough. Could it ever be enough? I know at least that I can take solace in the fact that I can wonder, and am not alone in wondering (and at times, fearing): What’s next? What now?