There’s something about traditions like giving someone the “key to the city” that makes me think being human is an incredibly silly business.

Today the Giants will parade about in downtown Manhattan, working their way from Battery Place and Washington Street to City Hall Plaza, where Mayor Bloomberg will present the Super Bowl victors with the keys to New York City.

Ok, let’s think about this.

The “keys”— that don’t open anything— to the city. It’s a symbolic gesture that presents “ownership” of a city as manner of honoring individuals. So, it’s either bestowing an outrageous responsibility on these unwitting cultural giants or a symbolic honor that amounts to…nothing.

The City of New York website describes the ritual as such:

” ‘the Key to the City’ is bestowed upon distinguished persons and honored guests of the City of New York. The practice of presenting a key to an individual may be traced back to medieval times, when admission into a city was hampered by many legal restrictions, as well as by walls and locked gates. The key symbolized free entry.”

The page goes on to detail the modern qualifications:

“In New York, the act of giving the Key of the City is symbolic, since the city has no gates to unlock. Today, the presentation honors outstanding civic contributions of the recipients”

Money aside, that time I recycled in the city is a greater civic contribution to the city of New York than a football game. True the team wears the state’s letters, but their stadium is in New Jersey. Their relation to the city is technical. To me, the gesture suggests this more than recognizing an “outstanding” anything:

Then again, I guess they have no real use for keys to…Newark. 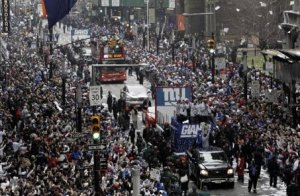 Don't traditions like this make you think about how pointless a lot of what we do is? Yea, me neither.

Ok, so, presenting “the keys” is just overblown PDA, a way for the city to welcome back the champions and say: “Hey, come back anytime.”

Of course, keys or no keys, they can return anytime they like. And, let’s be real, these guys aren’t exactly hurting for places where they will be enthusiastically received. Not to mention, they already should technically have the “keys” from 2008.

But as with most seemingly meaningless traditions, the Ticker -Tape Parade is fun—even if its name is a reference that is no longer culturally relevant. And arguably, it’s more for the fans anyway.